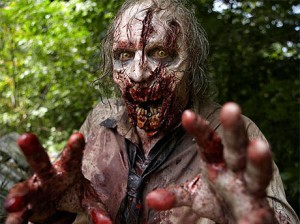 In keeping with the zombie theme my channel has had for the last few weeks I thought I’d start something akin to a Zombie Survival Guide where we figure out what the different options are for surviving a zombie apocalypse.  Perhaps once a month I’ll propose a new scenario where we discuss the best ways to go about surviving the potential disaster.  I’ll make sure to provide a brief outline so everyone is working with similar resources and background knowledge.  After a few days of discussion I’ll take the most clever/funny/strategic views back to the youtubes and spread them to the world!

Without further ado, here’s the first scenario and ground rules….

Seeing as how this is the first scenario I’ll define how the zombies work and then give a time frame for this first segment.

Zombies – The two main options here are mainly to go with either Romero’s Z’s or something closer to the “Zombies” we find in 28 days later.  For reasons that I’ll be more willing to divulge later on, I’m going to go with Romero style Zombies.  These are probably the most common and the Z’s everyone is already familiar with.  They’re about as fast as someone walking at reasonably quick pace, but that can change based on how damaged they are.

Our Z’s tend to infect survivors via bites, but it is possible to also get infected with scratches as well.  It’s presently unknown how great their vision is or if it’s enhanced by becoming a Zombie, but it’s understood that they do tend to triangulate positions based on sound and other Zombies wailing away.

The time and duration it takes someone to change from a human into a zombie is poorly understood, but has been known to range from a period as short as 30 minutes all the way up to several days.  The only way to permanently incapacitate one of our Zombies is not just with a head shot or head wound, but it has to be a disabling brain injury.

The backdrop for this first zombie scenario is present day America with mixed reports coming in over the news of various individuals who appear to coming “back” from the dead.  It’s unclear how legitimate these claims are as the idea of a zombie attack is something straight out of the movies.  However, the sheer number and variety of these reports is quickly becoming something you can’t ignore.

You’re a 20 something young adult who presently lives alone in a 1 bedroom apartment on the border of a college town.  You’re in between classes at the moment and have taken up a rather routine and somewhat boring job of becoming a store clerk while  you decide what you want to do with the rest of your life.  Your closest family members are around 900 miles away and you have never been great at making friends but you have a few people in your area who you hang out with from time to time.

For all intents and purposes you’re a fairly average human being without any exceptional physical or mental characteristics.  You’re no slouch, but you’ve never been known as a brain bank either.  The most valuable belonging you own is probably a tie between the beat up junker that you loosely refer to as a “vehicle” and your video game console.

Based on the influx of reports coming in you’ve decided that you aren’t willing to sit around and let the world go to shit while you stand by a watch.  You estimate that you have around 1 to 1 and 1/2 weeks to prepare.  What do you do?

Note: Just to make sure I’m absolutely clear, this first scenario deals solely with what you would do if you were given roughly a week and a half to prepare for a possible shit storm.  Nothing more, nothing less.