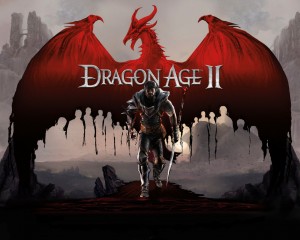 Per the front page of BioWare’s website, Newsarama has a hard time describing Dragon Age II as anything less than “epic“.  This is of course located directly underneath the 9/10 ratings given to it by both Playstation magazine and Xbox magazine.  Let me present to you the counterpoint: Exhibit B.  On a scale of 1-10, nearly 1500 user scores averaged together result in a collective rating of a 4.4.  Why the large discrepancy between the two scores you ask?  Allow me to explain.

Similar to the first Dragon Age (DA), this story takes place over the course of several Acts.  Unlike the first DA however, one of your supporting characters tells your story and every so often you fill in the blanks.  It’s an interesting concept, however at least from my point of view, I was left feeling like a bit of an outsider in what should have been my story.   To say that I didn’t enjoy watching a sidekick run the show is a bit like saying the Iron Maiden is mildly uncomfortable.  Understatement of the century.

My enjoyment continued to plummet with the tedious feeling of the games version of questing.   Essentially it has you running around town (Kirkwall) completing erroneous side-tasks.  I was willing to let this slide through Act 1, but the process continues to repeat itself Act after Act.  As bad as this was, it was compounded by the additional fact that each Act continues to take place in Kirkwall and the lack of new scenery over 15-20 hours (aka the entire game), is enough to drive one mad.

A large part of the reason you can’t help but notice the same stagnant scenery is because your party members might as well be zombies.  Their dialogue is completely devoid of any form of life or creativity.  Instead of something to look forward to, you begin to dread the soul-sucking dialogue scene just around the corner.  Was this really the same team who had also created Mass Effect?

The inventory system and loot were also said to be streamlined in order to well, uh… I’m not really sure why.  Take the fun out of looting something?  Part of a multi-pronged approach to push gamers to the brink of insanity?  Take your pick.  Similar to the first DA, felling an awesome fire-breathing dragon that blots out the sun with its massive teeth and claws nets you 20 silver and a sash.  Sash of immortality perhaps?  Not a chance.  It literally is just a sash.  What the hell kind of treasure is this?  And to put the 20 silver in context, there are once again items for sale that cost in excess of ~140 gold.  They’re not game-breaking items by a long shot, but they’re still there all the same.  You might be able to buy one if you forego buying anything else for the entire game.  For yourself.  Or your party.  And you sidestep the quest that costs 50 gold in the first Act.

Equipping your party members is also something of DEFCON 1 disaster.  The same monkeys who have been in charge up until now decided to stop throwing their own feces at each other and start making it impossible to swap out your characters armor.  Instead you get to upgrade it by conveniently checking every single vendor in Kirkwall every single time a new act comes around.  Everything else they use is upgradeable, but because 99% of everything you pick up is dog shit, you keep the fresh stuff and throw out the stale turds.

Everything I’ve said thus far could have been somewhat overlooked if the games combat was up to snuff.  As most people know, BioWare made a lot to do about how the combat is refined, streamlined, and more intuitive.  What they didn’t say was that the majority of all your abilities are passive, and the abilities that you do have are very few in number and typically on cooldowns greater than 20 seconds.  In BioWare’s defense, DA’s combat does look more impressive.  By that I mean your character has 4 or 5 different combat animations depending on the weapon they’re using.  However, despite the fact it has a greater visual appeal, it’s about as enjoyable as watching paint dry.  I should also point out that at the moment consoles are bugged and requiring the user to hit A for each attack animation, whereas the PC version simply auto-attacks.  Refer to this image from neogaf.com for explanation:

The reason why combat isn’t fun is a result of poor AI, too few abilities, boss fights needlessly dragging on, and best of all, enemies spawning on top of you.  Your allies, for reasons unknown and regardless of how you have their gambits set up, tend to charge across the battlefield to enemies the furthest distance away from you.  Ranged companions stay ranged, but choose the minimum distance not to be counted as melee.  This means that if they’re attacked they constantly run around and are unable to attack themselves in addition to being blown away by Area of Effect (AoE) abilities.  Ordering your companions back is only a temporary solution as the moment they’re attacked or you switch to someone else, they’re off again and doing the same stupid maneuver they were before.

Boss fights  are much more challenging as you ramp up the difficulty, and by more challenging I mean you have to chug more potions and they take much, much longer.  With so few abilities and bosses that can take upwards of 15 minutes on higher difficulty settings to chip away their absurd health pools, there is very little incentive to even play on a higher difficulty level.  They aren’t any smarter and they don’t gain any new attacks.  They do however hit harder and have a LOT more health.

Last but not least, the tactics.  DA is billed as a tactical, action-oriented game.  What tactics am I supposed to use with AI who refused to listen and play like they have a death wish coupled with enemies who literally spawn in on top of me in wave after wave?  If you guessed “running away to other rooms to fight the first wave without triggering the second”, then you’re correct.  Piss poor AI and enemies who teleport in make it difficult to do much else.