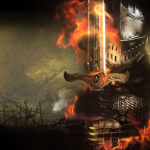 I’ve included the patch notes and details inside.  IMO the most useful update to come out of the patch is the potential upgrade of the bonfire and start menu.  I’m hoping speed and accessibility is part of that as they seem to take unnecessarily long.  While we’re at it I wouldn’t mind moving Emerald Herald’s ability to level you up to the Majula bonfire.  Can’t say I’m a fan of being forced into dialogue each and every time I want to adjust my skills.

As many of you know who follow my stream, one of my biggest complaints involves the Dark Souls II controls.  The double jumping/flasking/attacking is downright infuriating when you’re trying to take down those NG+ bosses and every move counts.  Likewise for many encounters, but it didn’t become especially crucial until I encountered NG+.  I had hoped that the update included critical updates to enhancing and cleaning up the controls but alas, it looks as though we’ll have longer to wait.  In the meantime, continue to enjoy your Power Stance Mundane Avelyn builds.  I guarantee that will be addressed in a future series of updates.