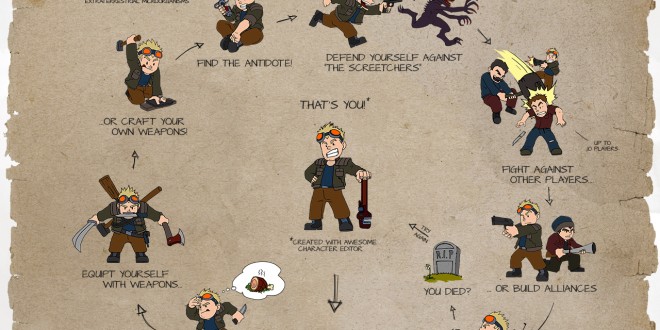 I was browsing the interwebs today as I’m regularly wont to do and stumbled upon this kickstarter that’s a 2D side-scrolling open-world sandbox-style survival/horror game!  A big chunk of what initially caught my attention was the games focus on matches; 30 minute matches that is.  Everyone starts off with the goal of finding a cure.  If you don’t find a cure after 30 minutes, you die.  Of course there are a finite amount of cures available so competition will abound.  In addition to foraging for a cure, they have a hunger/thirst system, crafting, and equipment upgrades available.  If you manage to survive other players, the screechers (see zombie), starvation, and find a cure, you win!  That is to say you get to move on to the next round with all of your equipment and grow that much more powerful.  Giving players an objective while concentrating the action and keeping the 1 life rule is something DayZ could have certainly learned from the mod.

If you’re able to look past all the bugs, glitches, graphical issues, zombie AI, crashes, and hackers, DayZ has/had a lot going for it.  As most people here know, I played the the hell out of it and had a huge amount of fun for a long, long time.  That said, when the standalone came out, try as I might I just couldn’t get behind it.  Once again, ignoring everything else, the game felt too large and lacked anything resembling end-game material.  I didn’t want to play a 5 minute round of grab-ass in CoD, but the logistics behind meeting up with friends and finding something to do once we had gear left me wanting more.

DayZ aside, this looks like a fun game I’d be interesting in sitting down to play.  If you’ve got a few extra rupees in your wallet I’m sure these dev’s wouldn’t be upset if you decided to toss a few their way.  They’re about ~40k short of meeting their deadline with 9 days left.  Worst case scenario the game doesn’t get funded, you get your money back, and I post another article about you ungrateful little shits spending all your money on Twitch donations.