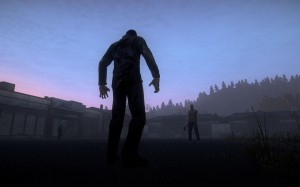 From Sony Online Entertainment (SOE) comes a DayZ spinoff that they’re classifying as a zombie survival apocalyptic thriller.  From what I’ve gathered, they’re attempting to bring over all the best from DayZ in addition to expanding on the “genre” with their own content.  SOE has promised a game that already has a robust item creation toolset, weapons, armor, vehicles, houses, and indeed the ability to raise your own crops.  Is it Rust?  Is it DayZ?  Maybe it’s something else altogether.  If you’re interested in what H1Z1 has to offer and a gang to shack up with, look no further.

The good news is that it sounds like SOE understand that DayZ is missing a middle/late game and they’re hoping to expand into that niche.  They’re going to be competing with Rust who have already got a big head-start on the survival/crafting/housing system.  One of the early key differences between H1Z1 and Rust are the dedicated servers.  I say early because SOE has gone back and made a few statements regarding tokens and the potential for players to start up their own servers.  I was a little bummed hearing this because I liked the idea of a persistent world that isn’t controlled by players.  There are clear advantages to giving people their own servers and letting the mod community run buck wild with them, but this also tends to fracture the player base via chaotic server settings and decreasing the maximum world size.  I’m not entirely sure how WoW servers are handled, but I can’t imagine hosting your own WoW server for 30k people is within the average Joe’s budget.

SOE has also contradicted itself via claiming the game is both FTP but it’s being sold for $19.99 via steam with a projected release date of sometime in late May.  It sounds like SOE was initially big on the idea of microtransactions funding this game but with the amount of info surrounding H1Z1 that seems to contradict itself we wont know until it actually drops later next month.  I’m not inherently against the title of FTP games, but off the top of my head I can’t think of a single great title that was launched as F2P.  It’s becoming more common for titles to include various micro-transactions inside them (ME3 MP for instance), but that doesn’t make a game free to play.  SOE dev’s have stated that when you die in H1Z1 you will drop and lose all your belongings.  With as many times that I’ve died in DayZ (most being to the natural environment) I’m not going to be in a hurry to drop $20 outfitting my character in ridiculous garb only to fall and break a leg and lose it all three minutes later.

With as many ways that there are for this game to go wrong, I’m always excited at the prospect of someone finally getting this right.  A persistent world with zombies, meaningful characters, post-apocalyptic environment, roving gangs of madmen hellbent on destruction; it’s the title I’ve always dreamed of!  DayZ was amazing  as the first of it’s kind but it need(s)ed more.  Rust attempted to go further with elaborate crafting and house-building but it didn’t take long before it was turned into a grief simulator and the team has been bogged down behind the scenes for the last few months sorting out code and license disputes.  I have no idea how H1Z1 is going to go but I’m looking forward to trying it out.

Looking back on my time in Rust and Dayz, I learned that survival is harsh.  Often times only the strong (and deranged) will survive.  Being a skilled survival/adventurer on your own isn’t going to get you very far.  If I had a nickel for every time I was held up at gunpoint in rust by a gang of 5-10, I’d have enough to make my own zombie survival game.  With that in mind, if you’re interested either leave me a message here or shoot me an e-mail at dinoridingjesus at gmail.  Until we get a better idea of the max server size it’ll be hard to to know where to cap this here roving band of marauders.   Until then, the more  the merrier.