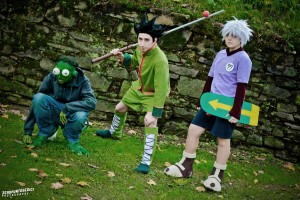 As promised, per what I said in the stream tonight I’ve thrown up a section pertaining to must see Anime.  I know someone said there was something about a German Beer and someone else mentioned 13 episodes of a waifu wombo-combo.  I’m a big fan of anything that makes sense, but then again I suppose I’m open to some things that don’t.  Berserk was great for 90% of the anime until completely lost it’s shit with Guts friend turning into a demon and RAPING Guts other friend.  Additionally, in my eyes an Anime would be hard pressed to have too much action.  Of course, a sexy waifu and amazing action would be better, but not always (looking at you Elfin Lied).  I’d love to hear whatever you guys think is great, but let me know why you do.  Nerd goggles required after this point:

The majority of anime I’ve seen probably qualifies myself as a “pleb”, casual, naruto-lover, goku-fanboy, etc.  I think the first anime I ever saw was a random clip of DBZ on the cartoon network.  I happened to be in luck as it turned out to be a clip of Vegeta giving someone in the Ginyu force the worlds biggest pile driver.  Now that I think about it, maybe he was being pile driven?  In any case, it was awesome and I was hooked.  Why were the ninja turtles always using their swords and nunchakus in ways that never made contact with anyone?  Howcome no GIJOE ever managed to actually shoot a cobra operative ala rebel stormtroopers from Star Wars.  These questions and more were rapidly pushed aside the moment I saw Guts resting on a mountain of corpses he’d recently slain.  The circle was now complete.

In any event, I enjoyed my time with many of the more well known favorites such as DBZ, Inuyasha, Ruroni Kenshin, Bleach, and of course Naruto.  Vampire D Bloodlust was the first Anime movie I saw and IMO still one of the best.  I’ve seen pieces or large chunks of Eva, Ghost in the Shell, FMA, and about a 1000 others.  As I mentioned above, the more plot holes I see the less likely I am to take something to the end.  I don’t know why plot holes , vague references and obscure definitions are so common in Anime but it is what it is.  Oh, and before you ask yes I’ve seen Yu-Yu Hakusho.  Great stuff there.  I think that more or less sums up the meat and potatoes of what I’ve seen.  If you aren’t sure whether it’s something I’ve already seen, please put it down!  I look forward to seeing what you maniacs come up with.