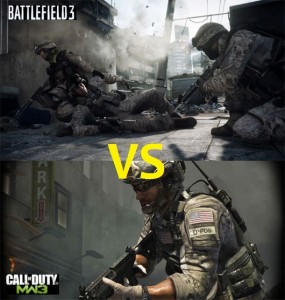 A few days ago in one of my livestreams we were discussing the various genres of FPS gaming.  I was attempting to define the crux of what it means to be a certain style of a first person shooter, but going in depth while simultaneously cramming my turkey legs down someones throat in Dark Souls II is easier said than done.  Before I launch into another stream today I wanted to take a few minutes beforehand and let you guys know how I define the shooter genre.

There are a multitude of different genre’s of FPS’s.  The longer that time goes on the harder it is to classify any specific game because hardware has allowed for genre blending that previously didn’t exist.  That said, each and every game that’s developed (FPS or otherwise) is not only with the dev’s goals in mind, but along a certain axis or framework.  What this means is that regardless of the actual game mode being played, the core or crux of the actual game itself could be something very different.

Battlefield 1942 pioneered the art of conquest styled gameplay.  BF1942 was built from the ground up as a conquest style video game.  This covers a multitude of factors some of which include large levels, greater range of movement, land vehicles, airplanes, various spawn points/bases, and of course various points you can capture in any order scattered around the map.  BF1942 actually had several gameplay modes, one of which was CTF.  For reasons unknown, some people actually did enjoy this style of game but it would be incorrect to label BF1942 as a CTF game despite being able to play BF1942 as a CTF game.

Counter strike.  CS is the original TDM based shooter.  CS predates BF1942 by several years and you can basically reverse all the categories I listed above when defining bF1942.  Small levels, fewer amount of players, restricted range of movement, no conquest style point capturing or spawning at said points, no vehicles of any kind, etc.  CS has numerous modes of gameplay available, but whether you’re disarming a bomb or killing the other team, the game was designed from the ground up to be a TDM style shooter.  It doesn’t matter what game mode you’re currently playing or how popular that game mode is, the crux of the actual game itself is a TDM style game.

Call of Duty.  I think you’re more likely to get people arguing about this game than the others because there are so many individuals whose sole FPS experience is the Call of Duty “experience”.  Similar to CS, Call of Duty was built from the ground up as a TDM style shooter.  Of course the PR department is going to spin CoD as this malleable wonder of the world that can be played in any number of different ways, but regardless of the modes included, it is a TDM style game for the same reasons as it’s CS counterpart.

What makes CoD unique relative to other TDM style shooters is that it was designed from the ground up not only as a TDM style game, but to include a host of variables that make it unlikely for one player to consistently dominate and poo poo on everyone else.  The level layout is built in such a way that it’s nearly impossible to safely clear you way around the map.  At no point in time are you ever safe and between enemies spawning on top of you and the excessive verticality and numerous doorways, windows, and murder holes, staying alive is less about skill and more about luck of the draw.  This is of course to say nothing of the various killstreaks and deathstreaks.

Consoles have also popularized the idea of P2P gaming.  P2P works for a lot of things, but it begins to break down when a split second decision can mean the difference between life and death.  Gone are the days of people bitching about anything over ~100 ping in dedicated servers because now we don’t get numbers but graphical representations of what your ping might be.  With P2P also means that 1 person gets to be the host and has a decided advantage over every single other person in that game.  Back in the day I felt it was unfair to play on local servers with friends who weren’t from the area because it essentially meant you were so far ahead of the next guy lag wise that nobody could compete with you and it wasn’t fun for the people who were being killed or your friends playing with you because they had no hopes of matching your score.

Games today aren’t what they were 15 years ago and they’ll have moved on again in another 15 years.  Some of the points I’m making may be moot, because those genres are likely to go extinct with the next generation of shooters.  With the success of games like DayZ and Rust, we seem primed for future generations of genre blending to take advantage of not only FPS elements, but RPG and survival/sandbox elements as well.  Who knows how good The Division will end up being, but who isn’t excited about concept of such a game even being possible?  15 years ago it was either CS or nerd bombing it up with pen and paper RPG’s in a comic book store somewhere.  I’m sure there will always be some type of CoD styled shooter out there, but with every year that passes brings us that much closer to dismissing genres altogether and instead defining games based on their elements or styles.