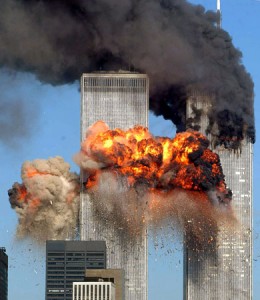 I’ll never forget what I was doing when 911 occurred.  At the time I had just placed the first call to a girl whom I would eventually start dating (hell of a first impression).  I sat down in our upstairs living room and turned on the TV as I chatted with her.  Bizarre news reports started filtering in talking about attacks or bombings on US soil.  Not understanding what was going on we quickly hung up and began to search for answers.  No sooner had I ended our call than I received another from a friend of mine who said we were currently under attack by Chinese fighter pilots.  To this day I have no idea how he got that in his head, but I was watching live footage of planes crashing into buildings so anything was possible.

Surreal doesn’t begin to explain what it was like to wrap my brain around what was going on.  The whole time I kept thinking that this simply wasn’t possible and there must be some mistake.  Who did this and why would they want to?  Was it an accident?  Surely there can’t be multiple accidents the same day in the same cluster of buildings right?  It reminds me of the first time I was in the OR and saw someone get their leg amputated.  Once their leg was severed it seemed to strange that it was no longer connected to the man’s body.  It was his leg so it belonged on his body, not in that other man’s hand.  What was it doing there?  It was if my brain couldn’t make sense of something it had not only never seen before, but had been conditioned to believe it was something it would never see.

The longer I watched TV the more atrocities came my way; men and women leaping to their deaths from burning buildings, the buildings themselves collapsing on the firemen attempting rescue, distress calls made moments before the planes impacted, and more.  I knew then that I would never forget that moment in time.  It could have easily been anyone in that position.  What could anyone have done to prevent that if they were in that position and not someone else?  Is there a defense against multiple individuals hellbent on destruction even if it means sacrificing their own lives?

Fast forward 10 years later and September still has a sour feel to it until 911 comes to pass.  One of the attendings at work mentioned how he was in New York at the time and watched the buildings fall after the planes had hit.  He told me how it should have been him inside that building but he’d postponed a meeting until later that day.  By sheer luck he’d escaped with his life and his as of yet unborn (unmade) daughter with hers.  Surely there are greater tragedies when measuring sheer numbers of lives lost, but for those of us who watched 911 unfold, we’re still feeling the emotional and mental aftershocks to this day.

I’d planned on tying this into something else but now that I’m sitting down to write it all sounds so trite and inconsequential in comparison to what happened on this date 10 years ago.  My gaming career hopes/dreams/woes seem pretty small relative to the size of the disaster on 911.  I can only hope that 911 was the last time I’ll see something of that magnitude in my lifetime.