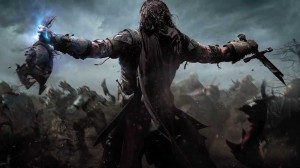 In an effort to spare you from reading 20 pages of bullshit IGN material or watching a 10m video, here’s my condensed thoughts on how Shadow of Mordor is shaping up thus far:

Playing on PC with a GTX 970 the game performs beautifully with an average of 85 FPS.  Looks amazing and feels very fluid and smooth.  The combat is clearly taken from the latest series of Batman games which I think is great.  They did a great job crafting their PC title with how streamlined the game feels and the smooth mouse movement.  Your character moves about with a style similar to Assassin’s Creed and it seamlessly blends with the Batman styled combat.  From a purely mechanical standpoint, it’s a joy to play.

The fun begins to fade around the 3-5 hour mark when you realize that while the games touted nemesis is indeed super fun, it’s not enough to keep you interested in the game.  The game begins to feel like a hodgepodge of side missions.  One gigantic side mission as they all seem to meld after a while.  The characters are done well and I found them very engaging when I was watching their dialogue, the problem is that their dialogue isn’t often enough and it feels like the dialogue is pushing me towards more combat versus me progressing towards more dialogue and storyline events.

The game attempts to create an open world where you actions are slowly undermining Sauron’s army.  Instead it often feels as though I’m a one man army who is attempting to slay every last orc/urk before the army ever gets assembled.  The combat is so, so satisfying, but it’s just not enough to keep me going 5 hours in and 8 or 900 orcs later.

Nemesis system = fun, combat is addicting, the flow and mechanics are top notch, but it doesn’t feel like there’s anything holding those pieces together.  The parts for an amazing game are all there, but they need a more substantial framework to root them in place in order to give the player a sense of meaning and purpose.

All in all, it’s still a decent if not fun play. Ff you already own it you’ll probably enjoy it most in doses.  If you have a huge hardon for the Batman combo system combat you’re probably safe picking it up.  If that’s not your thing you’re better off waiting for a sale.