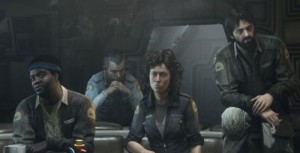 Alien Isolation: Isolated from fun and strapped into spaceship repetition staffed by mouth breathing androids.The game starts off us with voice/lip-synching that’s so bad you can’t help but focus on it which immediately pulled me out of the “oh shit, I’m stranded on a ship with an alien” element.  Before long we have to go investigate another derelict vessel.  By derelict I mean someone on the ship told our ship to stay the fuck away and don’t come here.  Between the garbled comms message, wreckage strewn about in space, and the various gasses rapidly leaving the station, our crew makes the decision to board.  Seemed like a good idea at the time.

Turns out we’ve got a serial killer aka alien on board.  Oh, and a bunch of psychopath robots who refuse to look in lockers and nutter humans who are running and shooting up the place for god knows what reasons.  From here I spent a solid 4 hours navigating a twisting maze that I can only assume a spiteful engineer crafted from his worst nightmares.  I saw a few glimpses of an Alien and from what I understand it eventually starts hunting you more actively, but even playing on the hardest difficulty it only came out during a few scripted sequences.  During those sequences I was of course forced to sneak about, but the same was true regardless of whether or not the alien was around  because everyone on board has some reason to want me dead and I’m apparently the flattest foot this side of the milky way.

I can’t force myself to go back and find out what else happens.  At no point in time during my 4 hour tour of duty did I come anywhere close to experiencing a sensation outside the realm of bamboo shoots underneath my fingernails.  I didn’t feel afraid, I wasn’t scared, there was no action to be had and the story was presented with objectives painted on screen which I accomplished via duck walking around and checking counter tops and computer screens while I mashed my E button.

In other words, this is why gaming reviews/pr/hype is utter garbage and you can’t trust what anyone says with more than 4294 twitter subscribers (hurr da hurr).  There were shitbirds on Twitch playing this game wearing heartbeat monitors and going berserk.  At the moment the  gaming industry is the equivalent of a underage white suburban teenage girl who gets “drunk” off non-alcoholic drinks.  This applies both to people selling AND buying the products.  With the success of twitch/youtube, if you want to sell a game you would do well to let the legion of streamers/youtubers play and advertise it for you.  The streamers see boosts in revenue/viewers with over the top reactions and collaborating with other douchebags who do the same thing.  The harder you sell it (see fake it) the greater your views and the better your chances of being asked to do something similar in the future.  Both parties continue to fuck themselves and each other dry while viewers sit at home and eagerly clamor for seconds.  I’m stuck ranting and raving while I debate as to which group I hate more.

10 years ago I would’ve told you that being a gamer meant competing in CAL and if you weren’t good then your opinion really wasn’t worth the time it took you to spell it out anyway.  Clearly that definition doesn’t apply today, but I look around at most of my fellow “gamers” and it’s fucking embarrassing.  Yea, I’m an ubernerd who used to crush other lesser nerds in the cyber athlete amateur league and I’m the one who’s embarrassed.  Dev’s creating same flavor with different color material alongside the sellout hacks that advertise their games are killing my favorite hobby since age retarded.  I used to go to sleep and dream about crushing blocks with my fist and shooting fireballs.  Now I go to sleep and dream about pewdiepie being hit by a bus.