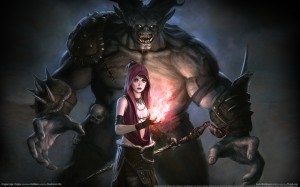 With Dragon Age: Inquisition launching in about a month (Nov. 18th) I thought it’d be a good time to go over what I think are few traits associated with great RPG’s.

1) Consequence-styled dialogue choices.  Essentially it’s asking the player either-or questions and often times there may be no right answer.  It’s in stark contrast to the blue (good) and red (evil) system that Mass Effect popularized.  The choices you make throughout the conversation will take you to a different place than someone who chose different answers.  Both Fallout and Skyrim often had 3, 4, or even 5 choices for a given conversation but regardless of your choice the story was pushed in the same direction.  Unique consequences and or rewards for separate dialogue paths create greater re-playability and increase the fun factor.

2) Inventory management.  Contrary to what Divinity: Original Sin believes, it’s an order of magnitude more frustrating dealing with loot dispersed over all of your characters relative to a single loot pool that each character can both add and draw from.  Dragon Age: Origins did inventory pretty well with the universal loot pool and the ability for each character to both add and utilize items.  Mass Effect had a similar system where instead of looting individual creatures the player hit a button after combat and “collected” all the loot.

In addition to optimizing the ways loot is collected and spread out over the group, there should always be some type of central loot chest or house your character(s) can store goodies they’re not using now but might want to use later.  One of the most popular mods for DA:O did just that, added a loot chest to the main camp.  Personally, I’d love to see some type of residence the player is able to customize and call home.  You can hang trophies from your latest kills, store your weapons and display your various armor.  Before you get ready to go out for the day you can walk through your own personal war room and the pieces you want to use that day.

3) Character skills accessible by the party.  For example, you decide to make your first character something of a wordsmith and start placing points/skill in areas surrounding persuasion or charisma.  It doesn’t make sense to add another character with identical skills to the party, but most RPG’s force you to start dialogue with the persuasive character in order to access those special dialogue trees.  If the rogue in your party is the only character who can unlock boxes or spot traps, it’s going to feel tedious when switching back from your main tank every time you go through a doorway or spot a locked box.  If you combine the incessant switching between characters when doing a dungeon crawl and add it to the need to select the right character when speaking with someone, you can see how it’d grow frustrating over time.

4) Intuitive AI.  Any game with a party system needs a user friendly UI and AI with advanced pathfinding abilities.  It can be frustrating when playing Mass Effect and your teammates sit behind cover firing into a wall.  It’s all too common in Dragon Age: Origins for one of your party members to simply remove themselves from combat and sit on the battlefield without exchanging blows.  That sensation of watching your party member run into your field of fire and light themselves on fire or be shot into orbit.  Feeling like you need to click 6 inches in front of your character for them to find their way around the world without getting stuck will probably grow tedious pretty quick.

In addition to the above, an elaborate system of gambits and tactics are a must.  It’s a difficult balance because as players we want options for every possible scenario but yet we want it user friendly at the same time.  My teammates in DA:O frequently got rid of their stances or sustained abilities and they often had to be queued back up at the start of the fight even though their gambits specified differently.

5) Multiplayer.  Co-op is such a satisfying experience and there’s a thousand different ways to make it happen with a traditional RPG.  If the game mainly revolves around 1 character as it does in ME, the multiplayer component may only kick in during combat missions.  That said, it would be easy to create a system where the spectators weighed in on which dialogue decisions were chosen similar to Star Wars: The Old Republic.  I wont continue to list all the different possibilities of multiplayer, but something that allows your friends to join in on the action and experience needs to baseline in 2014.

Did I miss something?  Let me know in the comments!