The Evil Within TLDR Review 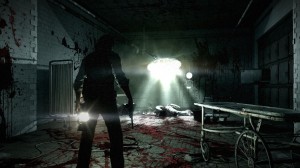 JCAHO will be so pissed

Creating a next-gen version of Resident Evil 4 in 2014 whist being lauded for genius-level game development the likes of which the world has never seen.

Game informer calls it: “A masterwork of Absolute Insanity!”  You want to know what’s insane?  The plot.  Can anyone out there honestly tell me what the fuck is going on in this game?  I get it that it’s Japan and they’re totally nuts.  It’s an island cut-off from the rest of the world and their culture has developed in a vacuum that has created an environment where it’s okay to think you’re going into a spa but in reality you just placed yourself in a rocket chair.  I think it’s great for them as it’s clearly worked out for people like myself who love marveling at a society where crazy shit is the norm.  That said, this plotline is completely nonsensical even for Japan.

The game starts off with our character exploring a hospital where everyone is dead.  Okay, creepy.  We check out a security camera and notice some maniac with god-tier speed killing 3 cops in 3 seconds.  Said psychopath then appears behind us and injects our body with an unknown substance.  We “wake up” in the basement of the hospital only to find that we’re literally hanging from a meat hook.  A chainsaw wielding maniac then chases us through an elaborate maze of terror only to escape in an elevator that seemingly heals a chainsaw injury we previously sustained to our leg.  And that was the part that made sense.

After we leave the hospital we jump in a moving ambulance that’s attempting to escape the hospital grounds which are now churning like my insides after eating some waldodude rosarita santarita mountainman chile.  Phew, that was close.  Wrong!  The driver of our ambulance spontaneously sprouts a variety of pustules and growths from his face before driving our ambulance off a cliff.  Once again, we “wake up” in what appears to be a hospital.  Luckily this facility comes stock with a nightmare chair that bores into your brain and upgrades your abilities with brain juice  currency you’ll find scattered around camp nowhere.  Worried you wont be able to find your way back to the action?  Not a problem because the “demented” mind of Shinji Mikami has you covered by means of teleporting mirrors.  Still following me?

Here’s a reality check; Shinji Mikami did something brilliant in 1996 when he released Resident Evil.  It was a game that no one had seen before.  It was scary, gripping, and it even had a plot that non-mensa members could follow.  You had extremely limited resources to work your way through the mansion.  In addition to limited guns and ammo, you even had to contend with limited inventory space AND limited saves!  It all gelled together and created an environment  that I’ll never forget and had far too much fun with.  Flash forward to 2002 and I’d argue Mikami did it again with Resident Evil 4, however this time the game was far more action oriented and placed a greater focus on combat whereas previous titles (especially Resident Evil) had prioritized puzzles over combat.

If we’re going to call Resident Evil the survival horror title that started it all, I just don’t see being able to cram The Evil Within inside that same category.  Evil Within feels like a spiritual succesor to RE4 which seems driven home by means of chainsaw dudes, cultists, and the overwhelming importance placed on combat versus storyline and puzzles.  I’d classify Evil Within in a genre closer to the action side of things.  It’s a story driven action game that takes place in a multitude of nonsensical environments.  I think if Shiji Mikami really wanted to make a scary game or solidify Evil Within’s place inside the survival horror genre, he should’ve done so by means of a plot line that doesn’t have the player teleporting through mirrors and constantly waking up in new environments.  That’s not remotely scary or spooky.  It actually comes off as a bit lazy because we aren’t watching a multi-faceted story slowly come together over the course of a game.  Instead we’re taking the Lost approach where nothing makes sense but that’s okay because they were dead and it wasn’t supposed to.

I really can’t close this page without a special mention of the locked frames at 30 FPS and the skewed god knows what aspect ratio that somebody supposedly thought lent a cinematic feel to the game?  Bullshit.  Total and complete bullshit.  We all know it was done to make things easier on consoles and they skated by shat out a mediocre PC port.  You can modify your launch parameters in steam which allows access to the console and unlock frames and aspect ratio.  The frame fix does seem to work although I’ve been getting occasional stutters even with a high-end GTX 970.  Modifying your aspect ratio doesn’t work because the character takes up 3/4 of the screen and there’s no FOV slider to adjust accordingly.  10/10 IGN.

TLDR: Fun game despite it’s technical problems and story incongruities.  It plays like a modern day RE4.  If you liked RE4 and have $60 to blow, I say go for it.