Nvidia Shadowplay is a great way to record your PC games 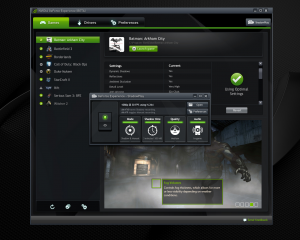 I’ve been shopping around for a while now looking for another way to record locally while streaming.  There are a plethora of options to choose from out there and I think I might have finally stumbled onto a winner.

At the moment streaming video games is a very CPU intensive process.  If you combine the load placed on your processor when streaming combined with a CPU intense game such as ARMA III you’re probably pushing the boundaries of your rig as is.  Throwing in the extra variable of locally recording while doing everything else can easily tip the scales and morph your favorite gaming rig into a raging bonfire.  Before your computer goes up in smoke and it’s only use is aiding you in crafting smores, you might want to check out Nvidia shadowplay first.

First off, Nvidia has always had all sorts of hokey bullshit promo software it throws at people in an attempt to sell you on buying their next video card.  I suppose that’s a chief reason why I’ve ignored their attempts to reach me for oh I don’t know, lets say EVER.  However, when looking at various options to locally record, I stumbled upon a huge amount of positive reviews for Shadowplay that prompted me to give it a whirl.  Basically it’s a GPU intensive way of recording versus CPU.  The idea is to let your card do the lions share of the work versus putting yet another strain on your already taxed CPU.  It may be a moot point if you’re running a 4k system, but to those of who aren’t this can easily be a godsend especially as video cards continue to churn out bigger numbers for smaller prices.  The GTX 970 is outclassing the 780 OC TI and is only about 2/3 of the cost.

Shadowplay can record in two different modes; shadow mode and manual mode.  Shadow mode constantly keeps a temporary file of up to 20m at a time of gameplay footage.  If something cool/funny/interesting/amazing happens you hit a button and that gameplay is permanently saved.  For those of you who aren’t interested in publishing an entire LP, it seems like a great way to make sure you never miss another amazing moment you want to share with friends.  It also has the side perk of letting you record any CoD match as most CoD matches are around 5 to 10 minutes max.  The second way SP records is continuously and that’s called manual mode.

Thus far I’ve had great experiences testing out SP and I’ve yet to run into any significant hiccups with it.  There’s a clear and marked difference in your frames and CPU load when using shadowplay versus anything else when it comes to locally recording.  It’s possible to stream with shadowplay as well, but it’s still in beta and lacks some options and features that would allow users to fine tune it to their own specifications.  OBS makes it so easy to stream and there are a number of great how-to guides on OBS forums posted by OBS themselves, so I don’t see a point in switching over streaming software at this time.

Shadowplay does require the use of a 600 series card or later so if you’re still rocking that GTX 570 you might want to consider upgrading.  I personally moved from the 570 to the 970 and it’s made a world of difference.  Great way to extend the lifespan of your computer.  I always love the idea of creating a new system from the ground up, especially now that SSD’s are more affordable than ever, but unless a great deal comes along I’ll probably stick with my current system until the next generation of Windows comes out in a few years.

I’ll be running SP whenever I’m streaming so if you  have any questions feel free to ask.