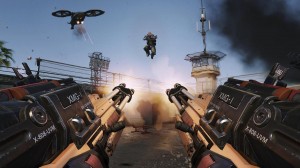 “hurrdurr its the same as last year”. Not even close. Fashionable to hate CoD, but it’s also ignorant. – Total Biscuit.

It’s difficult to level any type of criticism or critique without being labeled a hater or a whiner.  There’s an art form to the science of engaging someone with vastly different views from your own and I’d be lying if I said I had it down.  It’s also a bit of a catch-22 to mention a big name like TB for fear of being accused of pandering for views or attempting to stir up the pot.  That said, TB is supposed to be one of the last remaining peoples champions.  A voice of reason among a cloud of disillusioned phonies.  He not only has a significant audience but he has the reputation of being the white knight and that’s why his recent comments regarding the state of Call of Duty: Advanced Warfare rub me the wrong way.

Before diving into the details, I want to start at the outskirts and work our way in (just like any successful first person shooter should).  Call of Duty revolutionized the world first person shooters with the release of CoD 4 in 2007.  Fast paced battles, small maps, laser-like weapons, and killstreaks!  Everyone was in love and couldn’t get enough of it although I wouldn’t understand how or why for a few more years.  As time went on it became quite clear that the reason CoD was so popular was due to it’s plethora of skill equalizing factors that gives nearly every player an equal shot at feeling like a king for a day.  Instant respawns, accurate and fast-firing weapons, multiple kill zones and firing lanes, excessive verticality and murder holes.  This is of course to say nothing of the peer to peer connections (think Dark Souls PvP) or a minimap that showcases constant player locations thanks to shots fired, UAV’s, and various kill streaks.

It’s difficult to emphasize just how devastating some of these variables can be.  If I had to choose a biggest offenders list, the peer to peer system, map design, and minimap coverage would be at the very top.  In 2005 after our CAL season had wrapped up an outside sponsor stepped in and organized a Battlefield: Vietnam world championship.  It was the Americans versus the Europeans.  One round on US servers and one round on Euro servers.  However, there was one major detail to iron out; the Euros played with a setting that highlighted flags being captured on the minimap and the Americans did not.  For the life of us, we couldn’t understand why anyone would ever want to play with a setting that demolished any semblance of tactics, subterfuge, or strategy.  If someone had further suggested that not only do we show which points are being captured but where at on the map people are firing from, both sides would have thrown their hands up in disgust and walked away.  Today in 2015 both of these are default settings that no one bothers to question anymore.

Another area I want to focus in on are kill zones and firing/kill lanes.  These are terms used to describe the degree to which any one person has the ability to sight in on someone else and take them out.  A large reason why so many people have such poor KDR’s is due to the degree that kill zones and firing lanes are implemented year after year.  While it used to be possible to circle the map and work your way in from the perimeter, CoD is designed in such a way that you always have multiple blind spots and you’re unable to cover all of them.  This is true not only for your immediate vicinity, but holds doubly true for anyone head glitching/proning/crouching a ledge somewhere with an assault rifle waiting take you out at range.  In my opinion, along with the minimap abuse it’s one of the chief skill equalizing factors.

Several days ago TB had this to tweet out regarding the Exo suits in Advanced Warfare: “…Mobility makes a huge difference to the age old cod problem of dying too fast. It’s no longer a case of, the first person to open fire wins a fight. Dodging and careful mobility can turn the tables”.  By mobility he’s referring to a players newfound ability to quickly dodge in any direction including being able to double jump and swiftly crush an opponent under their heel.  What bothered me about this statement was its lack of contrast with mentioning the absurd power and range of assault rifles and how the long game completely nullifies any perk gained from the new Exo suits.  Double jumping and or dodging is all well and good in a close quarter fight, but aside from 1 or 2 close quartered maps, the vast majority of Advanced Warfare is specifically designed and caters to long range gunfights in the form of assault rifles.  If you’re under the impression you can rock a shotgun or dual SMG’s then I implore you to join up with a friend and win handily until you’re paired up with a group of individuals who have no problem sitting on pre-determined fire lanes and completely locking down the map from afar.  No amounts of strafing and dodging from your Exo suit or otherwise will save you from unabashed fire lanes that will have you locked down until said shooter is removed.

Essentially what it amounts to is this; the more variables thrown into the mix the harder it is to consistently get the cream to rise to the top.  The harder it is for any one person to consistently crush another individual into oblivion means there’s a better chance for the other 5 random Joe’s to get their licks in and feel accomplished about themselves.  Whatever skill there is that’s involved with strafing, aiming, and Exo dodging is completely nullified via the brutal effectiveness of long range combat.  Long range efficacy in combination with killstreaks and instant respawns ends up rewarding some of the worst behavior you can have in first person shooters.  It promotes stagnant and dormant players (we used to call them mushrooms) and instead of battles being fought tooth and nail over a given area of the map, you end up with head glitching contests and players confining themselves to a small area in order to control spawns.

Looking back on my own experience, there are clear parallels between the extremely popular Battlefield 1942 Desert Combat Mod and Call of Duty.  It featured guns that had 2-4x the fire rat of it’s predecessors along with bigger clips and better accuracy.  The vehicles lost their parabolic arcs and slow reloading times and instead fired a round that more closely resembled a laser beam than a tank shell.  Dominant players on infantry based maps who might be accustomed to 15:1 KDR’s suddenly found themselves struggling to hit 5:1.  If you really want to go down the rabbit hole we can go all the way back to James Bond on the Nintendo 64.  Everyones favorite way of playing the game seemed to be license to kill.  Why license to kill you ask?  Because they found it the most fun.  The fun aspect about it was that it completely leveled the playing field and nullified the ideas behind body armor and weapon runs.  The klobb suddenly became a good gun.

Sometimes I wonder how low the average KDR has to be in order for people to draw the line.  In the time it took me to hit level 50 in AW, I’d say the average KDR is significantly below 2:1.  That means most people are killing just over 1 person for every death they take.  There was a time in my career that I was ashamed and embarrassed if I died more than 2 or 3 times in a single round regardless of the amount of kills I had.  4 or 5 was tantamount to lunacy.  Is 40 kills and 20 deaths really a great game?  How about 35 kills and 12 deaths?  What if people were able to learn from their death as opposed to saying “meh, can’t watch 4 doors all at once”.

In order to create meaningful combat people have to feel as though they’re learning from their encounters instead of chalking them up to random garbage and making the same run with the same skillset all over again.  There isn’t anything to be learned from dying to to an assault rifle 3 miles out while you were strafing back and forth and attempting to capture said point.  Dying after walking into a room and that has overhead fire lanes and doors in N, S, E, and W quadrants is not going to teach anyone anything.  Exo suits are being used a travel system instead of a means to battle other players because they’re rendered redundant by virtue of high powered and fully automatic precision weapons.  There simply isn’t any way to learn from your experiences or sort out who’s good and who’s bad because everyone has been reduced to a similar level.  Ask yourselves what the odds are that you would’ve noticed Kobe Bryant or Michael Jordan if basketball hoops were 6 feet tall, the courts half as long, and with twice as many players.  More (variables) is not always better and in this case it seems to be decisively worse.