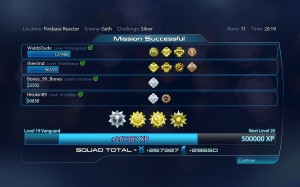 Playing a bit of ME3 Multiplayer earlier tonight and as usual it’s borderline impossible to pick up passable teammates.  As much as I might like to attempt gold guns, I’m not going to even bother because with teammates like these it would be absolute suicide.  Granted I went Vanguard (which I excel with) and Bruce is using a heavily modified lawnmower (falcon), but when my score is more than triple the other two teammates combined, something is clearly askew.

I wonder if the problem of finding similarly skilled teammates will ever be solved.  To me one of the most frustrating aspects of team based games is finding individuals who excel at the highest levels.  It’s far too common to find people who excel at the lower difficulties but just cannot keep up when the difficulty kicks into overdrive.  On a similar note, many of those individuals who appear to excel at lower difficulties will often only do so due to drafting off the skills of superior teammates.  It’s something that’s difficult to notice until those teammates switch sides or sit out, but it’s there all the same.

If you think you’re up for the challenge of smashing some ME3 gold on PC feel free to leave a comment with your origin name and we’ll see if we can work something out.