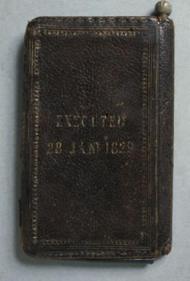 Continuing with the theme of needlessly excessive and macabre forms of entertainment, I introduce to you the process of creating books bound from human flesh.  I never would’ve thought this had been done so many times that it has now carved (har har) its own genre out.  It would seem that once upon a time paper wasn’t nearly so plentiful as it is now and as a result of sorely lacking writing materials people starting doing all sorts of bizarre shit like hacking each other to pieces and making books out of their skin.

I often wonder what it would/will be like to be born a 1000 years from now and frequently wish that I could be alive to see the day when space faring travel is akin to riding your bike down the street.  I’ll never forgive the gods of evolution for putting me in the 21st century and not allowing me to fire great big giant laser beam cannons cleverly disguised as a moon which they will surely be doing frequently in the future.

However wondrous (or terrible) the future may be, it would seem that every time I go back in history that the world was batshit crazy and people who had lost their damn minds were the norm rather than the exception.  I understand that this could still be considered the case for many people today, but for the moment at least my biggest worry is how to get as much content out to youtube and my website as possible versus staving off some god forsaken lunatic who wants to make a book out of me.  Literally.